A World Without Gorillas

A World Without Gorillas

To the Editor:
A few years before our son, Lysander, was born, we walked across the hills of western Uganda to come face to face with a group of habituated mountain gorillas who skirted through the Bwindi Impenetrable National Park as the dark souls of a primeval timeless forest. A baby gorilla stared at us clinging to a bamboo twig marshalling all the curiosity of a 6-month-old, without suspicion, without anger. 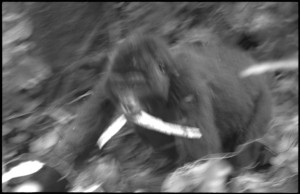 To see into its eyes from a few feet was watching the first stirrings of conscience from the arboreal root of our beginnings. What could it be thinking of the pale, white, human construct that had intruded on its paradise? A few miles away farmers cultivated their fields, some having never seen a gorilla in their lives. A small baby was sitting in a field by itself, in the background smoke was rising as if the aftermath of a war zone.

On the other side of Uganda’s Lake Edward and Lake Albert, an actual war zone that has wreaked havoc in the Congo continues to challenge the future of this endangered species that numbers only in the hundreds. Aggravating the civil war that has cost the lives of thousands in this region, so rich in minerals such as gold and coltan used for devices so dear to our hearts, like cellphones, are the multinational groups, like Total and the British oil group SOCO, that have had their eye on the oil in the region.

SOCO had wanted to run seismic tests and finally decided to pull out of this volcanic world heritage site of ineffable rain forests only a few months ago. Africa’s oldest national park, set up in 1925, may yet be saved. Bowing to public pressure, Desmond Tutu, the British government, and world conscience at large, SOCO decided it was not in its best interests to desecrate one of the wonders of the world. Let us hope the Chinese don’t do to Virunga what they have done to the rest of Africa. Let’s make sure they never even set foot there.

This kind of response is a triumph for sanity, but the question remains what kind of operating manual exists in the hearts and minds of those entrepreneurs who thought of desecrating such a unique place on earth and others like it, such as the Arctic or the rain forests of the world.

Like sister companies drilling in formerly pristine habitats in Canada and the Arctic and Australia, one really has to question the prerogatives and priorities of Anglo-Saxon civilization as a whole. Britain started the Industrial Revolution, and the aftermath of this world-numbing change in human behavior is only coming to haunt us in the last few years. The Virungas may be saved, especially if no Chinese oil company starts to drill there, but what of the rest of the planet?

Yes, Leonardo DiCaprio should be applauded for producing a feature documentary film, “Virunga,” which will win the Academy Award in a few weeks’ time. It is most appropriate that he should win his first Oscar, not as an actor but for a documentary film fighting to salvage an utter and irreplaceable jewel in the biosphere. Where are the other voices in Hollywood and business-minded tycoons who make millions and billions every year? What are their priorities? Or are their children just trophies? We need answers because it is costing the earth the lifeline to existence.

Our unconscious industrialism has almost bankrupted the organic world in the last 150 years. How much evidence do we need to realize that we have entered the danger zone? What indeed would Charles Darwin do today if he saw warlords carving up the forests of Africa so we could make house calls with our cellphones, of which most of us are guilty? What would he say to the native people who have been sacrificed for the fruits of globalization? What would he say to those great flaming eyes in the jungle who share part of our DNA chain?

Darwin figured out who we are in the physical and evolutionary spectrum of existence just eight generations ago. But it behooves this generation, all of us, in the next five years to come to terms with the vertical axis of our place. Who we are in relation to life, and what we are leaving the next generation? In 40 years’ time, a blink of an eye, most of the world’s fish could be gone. The story of the Lorax is being played out now. The seeds in the Svalbard Doomsday Seed Vault, where our son saw his first polar bears, will not replenish the forests of the world.

Do we love Creation enough to fight for the generation, or are golf games, the Super Bowl, and digital distractions enough? Is Disney with its animated films preparing us for a world without the non-human, without the animal forms that began childhood on this journey called life? In the gorillas’ eyes the answer has already been written, as Diane Fossey well knew. In the startling eyes of bonobos and chimps, which have been seen making fire, and orangutans sacrificed in the excoriated fields of Indonesia for palm oil, lie the mirrors of our innermost selves. Time will tell if the most recent of the great apes, humans, are truly great after all.

On our own front, the Republican lack-of-mind set that seeks to roll back any environmental action is demonic criminality at its worst. If we survive the 21st century, behavior such as that represented by the conservative branch of government and business will not be allowed into public office, and if they stole from the public good and the environment they would have to spend serious jail time, because it is murdering the life-support system of the planet.

To quote Ansel Adams, who had never been to Africa but who understood the wonders of the American wilderness, “It is horrifying that we have to fight our own government to save our environment.”