BOOKS: "Elephants On the Edge"

Elephants on the Edge: What Animals Teach Us About Humanity 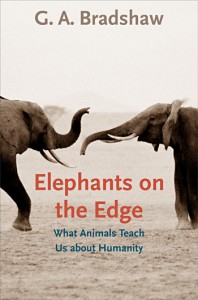 The well-being of animals matters, and not only because, as Jeremy Bentham said, “The question is not whether they can talk or reason, but whether they can suffer.” What’s more, we’re in this world together, and how animal life fares, so, eventually, fares humanity.

As G.A. Bradshaw explains in Elephants on the Edge: What Animals Teach Us About Humanity, we have a lot to learn from our four-footed friends. Currently, through culling, warfare, and habitat loss, the elephant population is down to a few hundred thousand (from millions), and elephants are truly traumatized; they’ve lost their longstanding culture, and youngsters have few older elephants from which to learn.

In fact, humans have intervened, rehabilitating zoo and circus elephants and treating distressed elephants as they would human trauma victims. And there’s the lesson for us: destroy our bonds, our accumulated knowledge and togetherness, and we destroy ourselves. We’ll turn rogue like the elephants who have lost friends and family and are dazed and aggressive. Let’s heal together; but first, read Bradshaw’s book. —By Barbara Hoffert. Library Journal, 05/21/2009

YOU CAN PURCHASE THIS BOOK AT: yalepress.yale.edu

Drawing on accounts from India to Africa and California to Tennessee, and on research in neuroscience, psychology, and animal behavior, G. A. Bradshaw explores the minds, emotions, and lives of elephants. Wars, starvation, mass culls, poaching, and habitat loss have reduced elephant numbers from more than ten million to a few hundred thousand, leaving orphans bereft of the elders who would normally mentor them. As a consequence, traumatized elephants have become aggressive against people, other animals, and even one another; their behavior is comparable to that of humans who have experienced genocide, other types of violence, and social collapse. By exploring the elephant mind and experience in the wild and in captivity, Bradshaw bears witness to the breakdown of ancient elephant cultures.

All is not lost. People are working to save elephants by rescuing orphaned infants and rehabilitating adult zoo and circus elephants, using the same principles psychologists apply in treating humans who have survived trauma. Bradshaw urges us to support these and other models of elephant recovery and to solve pressing social and environmental crises affecting all animals, human or not.

G. A. Bradshaw, who holds doctorates in ecology and psychology, is director of the Kerulos Center. Her work on elephants, chimpanzees, parrots, and other animals is frequently featured in the national media, including the New York Times, NPR, 20/20, Time magazine, the London Times, National Geo­graphic television, and National Geographic magazine. She lives in Jacksonville, OR.