This article was published in the Santa Fe New Mexican on September 21, 2019. LINK 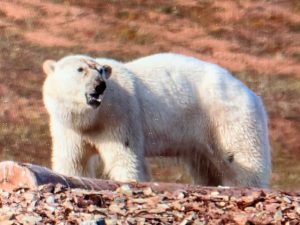 “The melting ice is the hourglass that marks the remainder of our time on this Earth.” — Lysander Christo

Rimbaud, the French 19th-century visionary poet’s haunting description cannot match the realities the great ice bear is going through, nor the hyperborean realities of the Kingdom of Thule in the far north that has moved the Western mind since the Phoenicians. The landscape that inspired the beginning of that marvel of the Gothic mind, Frankenstein, begins in the Arctic, a landscape coeval with the loneliness of a monster run amok on an unforgiving wilderness of subzero temperatures. The snow from the ice age of 125,000 years ago forged modern man’s mind. The polar bear was a constant reminder of our fragility and the great supervening deity, the greatest land predator on Earth. Both are threatened by the renegade behavior of our species.

When the Inuit hunted Nanook or polar bear, they confronted this great being with respect, because it was a giver of life and a being who could take life like no other. The Inuit took only what they needed to survive. Nanook means the one who is worthy of great respect. Indeed, the shamans who had visions helped mediate the human and animal world and could commune with the spirits of the air, earth and sea. It was precisely this great pantheistic spirit the Christian missionaries tried to erase with the shamans in the Arctic as they have all over the world. Today only a few elders remain who can commune with the spirit of Nanook.

“The Inuit elders,” John Huston wrote for our book, In Predatory Light — Lions and Tigers and Polar Bears, “want us to “see” the polar bear.  I think they are doing this in the hope that one day we’ll grow up to be mature adults. The elders talked about the truth of an ancient prophecy that the “earth and the sky can be changed by people” and that we should take responsibility for looking after our planet. Stop “burning” the polar bears. They are Very Important Persons and worthy of our utmost respect. Look into their souls and you will be changed.”

Today there may be no more than 20,000 polar bears classified as vulnerable, but trophy hunting is still allowed across the Arctic. Polar bears already are distraught by the loss of much of the pack ice that they need for seal hunting, how will they survive the continued persecution of trophy hunters? They are capable of going for months without food. They exhibit a power perhaps unique among all the mammals of the world, but having to depend on geese eggs on land is making their lives very precarious indeed. How can they survive the continued onslaught of gun-wielding trophy hunters?

Many papers still use the word “harvest” to underscore the taking of polar bears in Russia. And it is happening in the hundreds every year. More poaching happens in Canada now than in the 1960s and 1970s, according to Norwegian conservationist Morten Jorgensen. They actively encourage trophy hunting.

In Svalbard, Norway, above the Arctic circle, I had the honor to speak to Ole Jorgen Liodden, one of the world’s premier experts on polar bear populations, who emphasized that some subpopulations are taken out at a 10 percent rate annually. With others it is 5 percent but critically beyond what they should have to endure. Climate change is creating an existential drama for these monarchs at the top of the world. They do not need the malice of our kind. Sport hunting is imperiling the overall population, something the climate argument would have us forget.

Polar bears are listed as vulnerable by the International Union for the Conservation of Nature, but they should be classified as endangered — if the ice completely goes, they will disappear forever. A central light, a being of unbelievable strength and grace, a central soul at the top of the world will be no more. A key measure of why we are here on Earth will have vanished.

If Maasai warriors in East Africa who used to kill lions for clan prestige can now become the lion’s guardian, surely the Inuit and Western man can do the same. The mistake we are making is to insist that only climate issues and the loss of pack ice menace the polar bear. Increased human presence in the Arctic for trade and minerals is putting more pressure on bears. Increasing confrontation with humans is also occurring. To see a polar bear struggling amid the polar ice, trying to leap from one platform to another, swimming for some measure of ballast and buoyancy amid a decomposing world, is one of most heart-breaking sights on Earth. And a law to stop trophy hunting forever must be passed before it is too late.

If they should go extinct, which trophy hunting is enabling, no money in the world will return the greatest predator on Earth to the top of the world. The Arctic will have become a complete wasteland. Polar bears are not being adequately protected, and legislation needs to be passed here in the U.S. and Canada to match their predicament. The polar bear is the greatest canary in the coal mine of our renegade and overbearing species. The polar bear must be saved from the arcane and the wanton blood lust of our species. “Sport” hunting, aka pure murder, must come to an end, not just for the polar bear but also for our place on this suffocating, increasingly diminished Earth.

Cyril Christo lives in Santa Fe. He travels with his wife, Marie Wilkinson, and their son, Lysander, collaborating on photography and film documentary projects.