Saving the Great Being of the Elephant

One day the absurdity of the almost universal human belief in the slavery of other animals will be palpable. We shall then have discovered our souls and become worthier of sharing this planet with them.
— Martin Luther King

If, as Gandhi said, the mark of a civilization can be measured by how it treats animals, then our planetary civilization is failing. The latest news of the total butchery of 26 elephants in Chobe Botswana, marks a diabolical phase in the continuing loss of earth’s greatest mammal, the African elephant. 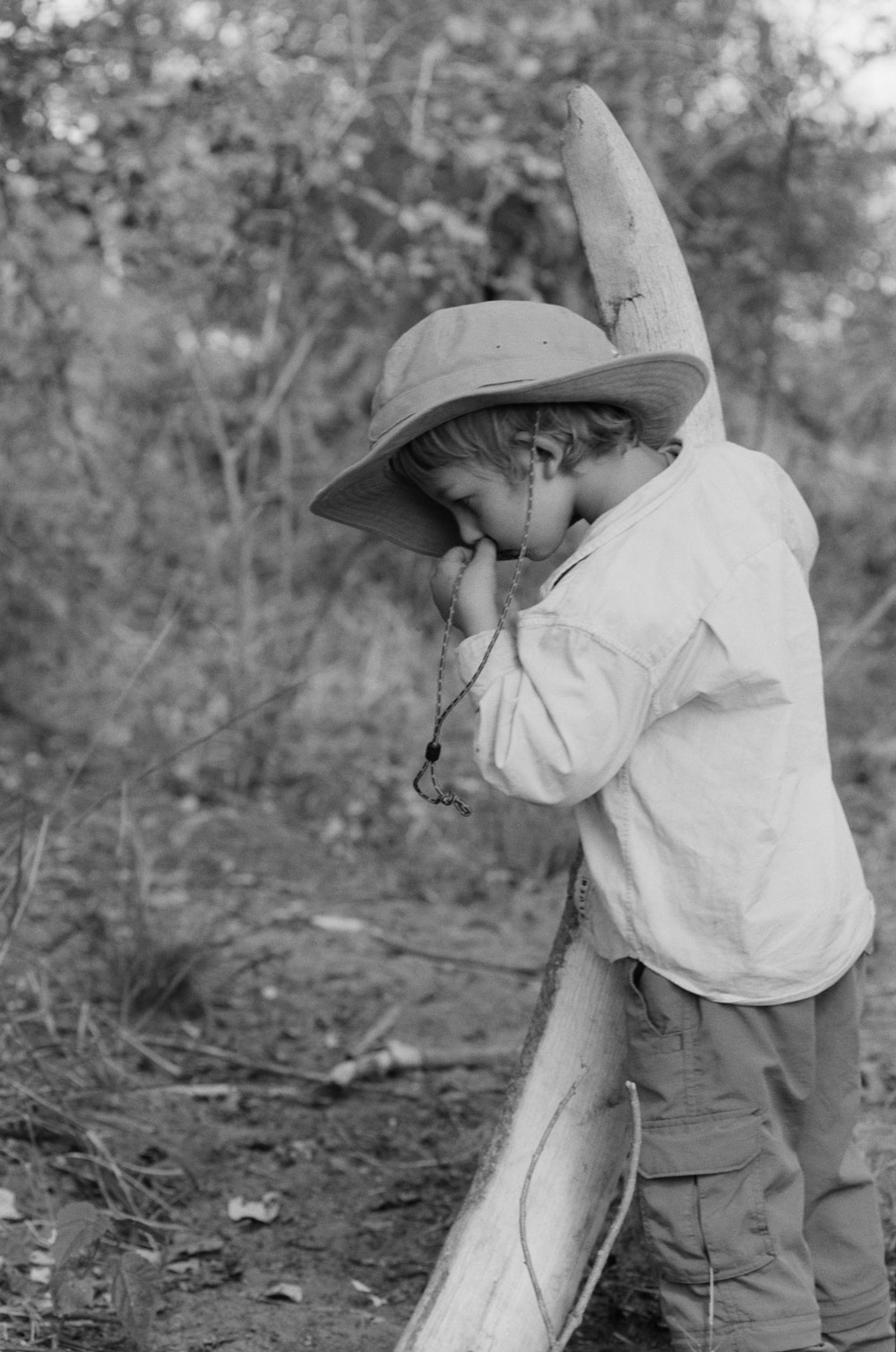 Lysander with a tusk from a dead elephant, in Botswana, 2010. (Cyril Christo and Marie Wilkinson)

Poachers might come by helicopter from across the border in Namibia or neighboring Zambia looking for the last great population of the world’s elephant. Botswana is the last outpost and the last great wildlife frontier on the planet. Dare we lose Botswana and we lose a cornerstone of the planet!

Poachers are looking for easier targets after the bloodlust over the last five years eliminated over 60 percent of Tanzania’s elephants, especially in the Selous game reserve. The forest elephants have seen over 65 percent reduction in their overall population over the same period. We have now entered an epochal moment for life on earth. If the greatest elephant refuge on earth cannot be protected, what on earth can we save?

Having spoken in front of the UN in October 2013, at a march for the elephant, the first march for any species in human history, I asked my son Lysander to say a few words. As an 8-year-old he said very simply, in Biblical terms, “Do not do to elephants what you don’t want them to do to you!”

I have seen him take some of his first steps and utter his first words of sheer amazement in Africa, the place of our origins. He has absorbed the lessons of the wild and its irreplaceable wonders. The battle for the elephant is a battle for what is best in the world.

“Lose the other beings, our fellow animals,” as a native Samburu elder told us in Kenya, “and we will lose our minds. The only thing left will be to kill ourselves.” Many tribal elders have talked about putting a curse on those who kill elephants. This should be a reminder that something enormous is at stake.

As humanity designates this time as the Anthropocene, we need to pull back and ask ourselves, what species we really want to be for the coming generations? Just as France has forbidden the trade of ivory in France and French territories worldwide, so too must the English. The recent Guardian article mentioned that the Tories do not back a comprehensive ban on ivory.

We know the corruption in Africa, fueled by demand in Asia has been rampant, but do we need the conservatives of the British Empire to highjack the conservation process? The pledge to stop the internal ivory market has not been met. Between 2009 and 2014, 40 percent of all seizures in the UK has been ivory! And as the article underscores, the Chinese wonder why they should close their markets if the English can’t.

This is not the kind of international cooperation that will save the elephant. Hopefully the helicopter incident will not incite another. Botswana may be better equipped than Tanzania. But let us remind Botswana that shooting San Bushmen from the air because they were looking for antelopes to feed themselves is unforgiveable.

As the oldest continuous genetic group on earth the San know better than anyone how to honor the earth. It is indeed ironic that just as Botswana was implicated in serious human rights violations against its own people, people whom its president does not honor, a major tragedy for an incomparable animal happened on its northern frontier.

Half the world’s wildlife has been lost since I was born. The recent incident in Chobe, Botswana is a reminder that no place on earth is exempt from massacre. We can no longer gamble with the elephant’s future. We now know through the great elephant census paid for by Paul G. Allen that Africa has little more than 350,000 savannah elephants.

Vanity, corruption and business as usual is deciding the fate of a being, whose fate is entwined with our own. We now know how many elephants remain. Now we must close every loophole in Europe, Africa, Asia, and North America and pay for serious operations and ranger ‘s abilities to respond on the ground. They are outmanned and out gunned.

The recent elephant census only cost a few million, seven to be exact. But what are the world’s billionaires willing to pay to save the place where man was born? We as a species need to do more, much more while we still can. In ten years it will be too late. Humanity will have lost a continent.

The world community must decide on salvation because the elephant is one of the pillars of the planet. Certain wildlife groups in the United States are loathe to push for Appendix I status, groups which supposedly cherish and fight for animals. They are the conservation mercenaries who play games with a species lifeline. They are those paid off by the special interests of the world. These have to come to an end. The elephant’s fate is our fate. The survival of what is left of nature is the great existential issue of our time.

My grandfather helped sign the truce with an occupying force in August 1944 in Paris. My grandmother and mother were born in Morocco and I hope the refugees of the world and the blighted political borders of the world can be healed. But the elephant issue, the near ontological miscarriage of an entire species is something Mother Nature will never forgive us for. We have butchered ourselves for millennia. What is occurring to a species that helped us feed ourselves through their flesh, leading us to water and migrating alongside us across the face of the Northern hemisphere during our entire earthly passage is something commensurate with genocide. They are wholly innocent and more coherent with the world than we can ever hope to be. That is why need them more than ever before. The tide must be reversed this year.

I have seen elephants in states of high anxiety after seeing rangers passing by in their cars in Kenya and Tanzania. The corruption is an inside job. But the European powers, especially the UK too must change internally and immediately or the elephant will continue down the extinction vortex. One has to wonder if a country that brought big game hunting to Africa and which continues to persecute foxes for the whimsy of an elite class can alter their behavior. Trophies are part of their patrimony and 7 out of 10 trophy hunters come from the United States. We are supposed to be conservation’s vanguard, but we are obliterating the life force of the world! And we are running out of time.

If we lose the elephant, we will have lost not just another species, not just a fellow citizen on planet earth, as a pilot in Tsavo, Kenya, once told us, not just an enormous ballast in the ecology and spirit of the world, not merely a mind of comparable proportion and feeling to ours but a singular sentinel in our ability to experience life and be fully human.

Something immorally profound is stalking the conscience of the world. It is the other side of the coin that allows people to divide and persecute each other over religious or cultural differences. But make no mistake. This slaughter of the elephant goes back to the roots of who we are as a species. In the beginning we hunted to survive. Now we act as barbarians. If we do not cure ourselves of this disease, the stage will be set for our complete unraveling.

As a rabbi in South Africa told us, the word “pil,” elephant, is the root of the verb to wonder. We will have no words to explain to children of the future that adults dismembered their world, that the elephant was lost, and with it, wonder for all time. Children, and humanity will have nothing to look forward to. Civilization will stand or fall on the back of the African elephant. The elephant persecution is civilization’s Golgotha.