Sublime Silence: In Praise of a Necessary Predator – the Leopard

Sublime Silence: In Praise of a Necessary Predator – the Leopard

The leopard haunts the forests and lurks in the shadows of the savannahs of Asia and Africa, like a stealthy ghost born in equal measure of the golden sun and the dark earth, with coal black spots that dapple its tawny skin. It is always a thrill to see a leopard, and the cries of baboons or birds erupt when the master stalker is on the prowl. It’s as if Creation were sending out its avant guard to the rest of the animal kingdom, and saying, “Beware, an extraordinary being is among you.”

But today the cat that inspired “How the Leopard Got His Spots” from Rudyard Kipling’s Just So Stories, beloved by children the world over, is threatened. The leopard may well be encroaching on human habitat from Nairobi to the cities of Asia. But it is humanity that continues to slay it for its skin, for tawdry body parts that adorn the depraved among our kind. It is losing its home to the treachery of trophy hunters who decide to slay its impossible beauty, menacing the future of a predator that walks the world like a rare gem in the sentient arsenal of the world. 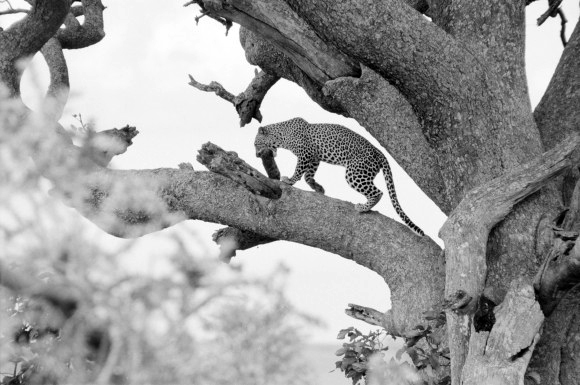 A leopard in the Serengeti in Tanzania in 2012. (Cyril Christo and Marie Wilkinson)

Leopards often appear as apparitions from nowhere, like the ultimate ghost of the wild.

Once on Christmas day in the Serengeti, when my son Lysander was five, a leopard presented itself on the branch of a tree nibbling a large baobab seed—an oversized cat playing with its favorite toy.

On another occasion we were following our Maasai guide Olyasepa on the Rufiji River in Tanzania, narrowly avoiding crocodiles and searching for elephants in the heyday of their tragic slaughter that claimed 60 percent of their population. These elephants had overwhelmed the Selous Game Reserve just a few years ago. Suddenly, it appeared, sunbathing on a boulder, by the river, a superb iconic male leopard, as if a guardian of the Selous, defiant of all triumphantly at peace with the world.

READ THE COMPLETE ARTICLE PUBLISHED AT THE EPOCH TIMES ON MAY 7, 2017