The Elephants from the Land that Time Forgot

The Elephants from the Land that Time Forgot

One overwhelming afternoon, four remarkable, four legged planets of perfection moved over the poem of the African wilderness and stepped into our hearts forever. 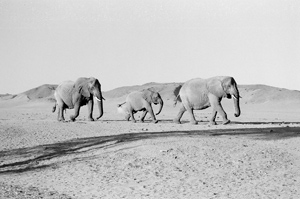 They roam the hinterlands of the Namib desert, the world’s oldest, like relics from a fabled country that time forgot. They are the last silent juggernauts on earth and they roam the arid Ana and Mopane forests of this country of 2 million like enormous ghosts. When one does finally find them, their mere sight provokes an antediluvian memory of the strides of behemoths who once ruled the earth. One is seized by the image of a mythic construct, like wandering giants of gargantuan power.

We are very lucky as a species because the imponderable presence of a small, secluded population of elephants lords over a largely ignored portion of the planet like sentient sentinels and messengers that the world still operates on a different tempo than ours. Humanity does not belong on the same earth as these beings. Yet here they wander, pachyderm monsters that are among the last desert elephants on earth.

We had come to see black rhino on the far edge of a wilderness zone of several million acres. The Rhino Trust maintains a fantastic refuge for one of the last rhino species on earth, the black rhino. In this enormous outback we chanced upon the footprints of a small herd of elephants who had not been sighted in over five months. That they would manifest themselves the very day we were there seemed more than a coincidence. The event felt like a gift. Whatever the cause or reason for this chance occurrence, it gave us proof that a greater consciousness regulates the thin envelope we call the life force on earth. 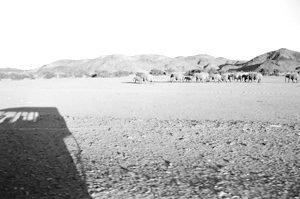 We started eyeing the elephants from a basaltic ridge several hundred feet off the river floor. Climbing on top of a basaltic ridge several hundred feet high was a perfect vantage to see the slow advancement of the bachelor herd. The entire outback was ours and we felt as if were possessed by a primal piece of the world. For several hours we marveled at the slow encroach of the most isolated group of elephants on earth. Nothing disturbed the silence of their steps. Their moved as if carrying 30 million years of history on their backs, as if they were slow moving boulders of conscience ambling through the songlines of time.

For several hours we moved alongside them as primal man must have done, watching their every step with the luxury of a humble bird’s eye view over the giants of Creation. But contrary to the tactics early man would have used to hunt elephants, we simply walked benignly in step with a being whose species preceded ours by tens of millions of years, enthralled by the prowess of their steps as they carried a small part of the majesty of the world in their gait. Here perhaps more than anywhere else we had ever been with elephants we sensed the impact of their steps as their carved their way through the membrane of silence to impact the brain of an entire continent.

Elephants have helped fertilize entire rainforests but here too among some of the most scorching panoramas on the face of Africa, elephants pressed their memory through an ancient geologic mind, following millennia old migration paths as their ancestors had done since time immemorial. In the harsh, at times infernally hot volcanic spell of the wilderness, were witnesses to the most silent and transcendent steps in Africa. Soon they would disappear into a forbidding mystery where no one could follow. Their fellowship for a few hours provided unequalled beauty. 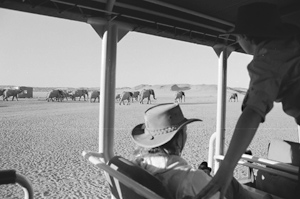 They moved like castles of flesh and blood abiding by a grander and more coherent temper than ours. In contradistinction to the hurried pace of the mechanical mayhem of modern existence, their passage exemplified grace meeting the force of gravity and heat headlong. That they showed themselves that afternoon was a treasure. It humbled our place on earth and verified that among the greatest of all moments on earth are when two species move around each other, like two planets magnetized by each other’s orbits and place on the absolute horizon of existence. Except that the elephants do not need us to continue their ineffable strides.

We are the ones who so desperately need them to learn the stillness and peace that may yet save our souls from oblivion.

And then there was the village of Derriet.

Ten years ago in the salty plains of Amboseli, Kenya we watched transfixed as three young Maasai warriors, perhaps nine, ten and eleven years old walked with their cows towards a waterhole with a group of elephants emerging out of the dust behind them as an immense backdrop. That moment was sketched into our minds as proof of how humans, domestic cattle and elephants have cooperated for millennia. After having sought out an elusive elephant herd for hours, searching out different valleys in central Damaraland, Namibia we finally found a solitary bull walking between shifting dunes, dry river beds and arid bush. He felt like a walking mirage and a near god who had somehow emerged from the sand. Our remarkable guide Dawid had once been touched by a wild elephant in the Caprivi Strip. Seduced by the elephantine touch, he knew they would be his life’s work. The bull we found late one afternoon was on a mission and we followed him, worshipful like a sentinel towards the waters of life. 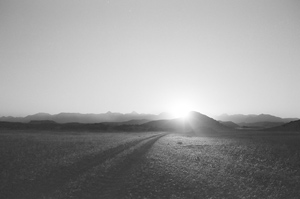 Arriving at Derriet was coming home to a village that felt like the center of the world. Few people stirred. The town, home to perhaps a hundred people felt abandoned, but it was not. People had entered their homes to make way for the big ones to arrive. Ramshackle houses, simple adobe structures with stone and corrugated steel roofs punctuated the landscape like a fixture out of Mad Max. This was where the film was made, in the incredibly remote, near forlornness of this country. Despite its seeming void, the village felt like a refuge, a sanctuary where humanity lived in respectful relationship to the larger world. It was inhabited by trekkers who had made their way from South Africa decades before and managed to eke out an existence on nearly nothing.

The government helped them with food, basic shelter and that most necessary element, water, the very commodity that lured the elephant herds that would come from miles around to drink. As we saw the cattle coming towards the village on our left, a herd of about ten elephants moved from the dry river bank, ambled to Derriet on our right magically appearing as if lured by the waning light of day and the smell of distant water. The village felt abandoned but it was not.

Everyone in Derriet had made their way back to the safety of their shelters. People watched cautiously as elephants paraded down the central corridor of Derriet and started to drink from the main cistern of the village, a large structure ten feet tall by fifty feet across donated by the government to help the elephants keep away from the villagers’ water. Lifting their trunks over the edge of the well and dunking their trunks into the reserve marked the ceremonial end of day. When the elephants finished their ritual drinking they would march toward the forest and disappear like grey phantoms in the emerald sea of the forest cover.

The elephants attracted visitors and foreigners which brought much needed revenue and the locals received stipends from the government. The coherence and respect humans showed for the elephant and the elephants for the human presence there is something of a marvel in this time. There was no apprehension or danger from either species. The alien invasion of the elephants into the small township was reminiscent of a ballet from the 1001 nights. This town in the middle of nowhere elicited a sense of marvel as the greatest beings on earth sated their thirst for a brief half hour and then migrated back to the dry river bed and forest , vanishing into the mystical lavendar twilight of Africa. Every night, in essence, they transformed into the spiritual mascots of the local villagers who honor them as peers, and who quietly watch them return to their world.

There was magic in the occurrence, and the hope of two species living side by side actualized. If governments all over the world can make room for elephants and their migration paths, allowing humans to cohabit an ecologically sensitive zone and sharing in the common weal of the world, this uncanny village of Derriet stands as something of a monument of hope for the world. True Namibia is a massive Texas sized country with few people but the possibility, even promise exists for co-operation and understanding between two seemingly disparate species but who also share so much in common.

Elephants, in their tolerance of us, are showing us the way to a social and ecological balance between two world impacting species. Derriet singularly stands as a landmark of respect between two seemingly incompatible worlds. One woman Josephine told us, “the elephants are my friends.” She talked as if the elephants were part of her family. The intensity and joy she evinced was remarkable, as if in some deeply elemental sense, she was a part of their very fabric. We interviewed her and then watched the elephants arrive as if from nowhere. Lysander even got on the top of the car, watching elephants pass by as if they were sheep coming to pasture to drink. He was transfixed as if a spectacle of unbelievable stillness and peace had come to the land, indeed was still able to unfold on this planet.

Out in the open air, far from the madding crowd, a procession unfolded unlike any on earth. The whole vision was like a fairy tale. In this time of tremendous fragility for the megafauna of the planet, the elephants are sentinels to another more complete world. Will the greater Chinese presence in Namibia challenge the desert elephant or will they be allowed to roam in freedom? Derriet, is a little oasis of possibility, a small outpost of sanity. There are few places like it on earth.